Waves has released a brand new distortion and saturation plugin that will turn heads! It’s called Berserk and the name explains it all. This beast can do pretty much anything and everything distortion enthusiasts desire, extremely well. 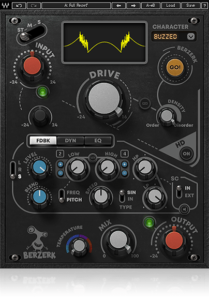 Waves are one of the most influential and household names in the entire plugin world. Recently they have been shifting focus into areas not yet explored (such as their Abbey Road Studios 3 where you can literally sit inside Studio 3 of Abbey Road and hear the ‘room’ as if you are mixing there in headphones), as well other types of better known plugins; such as the new distortion plug. The Berserk plugin that we will talk about today is not reinventing the wheel.  Instead, it’s more like taking the wheel and throwing dirt all over it and stabbing it with a pencil to make it pop and explode in the most beautiful way possible. This is what distortion is about anyhow, destroying a signal in the most tasteful way you can! Waves has achieved this gorgeously.

So let’s dive in and check it out!

Distortion… a touch… or a LOT.

This plugin is a creative, versatile, dynamic distortion that lets you build wild distortion effects with a lot of room for experimentation. It combines distortion, dynamic control, even feedback, with 10 originally developed distortion waveform shapes to choose from. This means it gives you the utmost control from just about every aspect of what distortion can do to your audio signal. The distortion shapes can be chosen from the Character menu. They have very obvious different sounds and can be fully mutated to fit the content as you feel it’s needed. I found great use of this both on Guitars (metal!), Synths (Dubstep!), and even vocals (Rock!), but they can also be used to just add a touch of vibe as you push or pull the wet and dry mix knob. With character names like “Freaky

”, “Clipped”, “Fuzzed” and “Frenzy”, you can tell what you are about to get into right away. You can even hit their “GO BERSERK” button and it will randomize the distortion shape in surprising ways to give you a gamble on what will happen next!

Additionally, there is a Mid/Side and Stereo selection to assign the distortion to any of these signals. This is great for adding onto groups and only sizzling the top and sides as needed. Try this on gritty mid range dubstep bass. Want to add fuel to the fire and punch to the distortion? Then you will find the dynamics section dynamite. There is both upwards and downwards modes, and you can then blend the signal to taste. Things get interesting really fast!

One of freakiest parts of this plugin is the feedback section. You can take the signal and make it completely chaotic, pitching around as much as you want. This is no ordinary feedback knob, expect the unexpected! It’s more like a chaotic pitching demonic signal generator that adds something super crazy to your distortion. Use with care here, you’ve been warned!

Along with the feedback and dynamics is standard EQ, which does exactly as it says. It allows you to EQ the signal split into 3 bands. Low, Mid and High. You can choose the bandwidth, gain and frequency to keep it very simple and straight forward. There is a big DRIVE knob in the middle and this is your best friend if you want to test out the amount you want to actually put into the signal.

This is where you can decide best. This alongside the Dry/Wet as mentioned can help give you the results you desire.

Berserk also comes with a great feature that is called “Temperature”. This can make your distortion signal more ‘warm’ or more ‘cold.’ I love it. After you get the sound just right you can then throw this in for a taste of livening up or dimming down as you see fit. Great for added control of the overall ‘feel’ of the distortion you want to bring in. Getting trashed audio to sound good in the mix is all about control, the Temperature knob is an amazing assistant for this.

And last but definitely not least… it has a great GUI. There’s not too much ‘fluff’ and each knob and section gets straight to the point. This makes it easy (and fun) to use. I am never a fan of plugins with more focus on the GUI than the actual sound and “Berserk” combines both; a simple and straight forward user experience that looks good.

So my overall thoughts about this plugin is you can’t go wrong with it! Well, you can, and you can go WAY wrong, but in the best way possible. There were times I gave it a bit too much and was literally scratching my head going “Wow, that sounds so wrong to what this sound was before, but ma, is it awesome!”.  You can make great use of this anywhere you want heavy distortion. So I say hop on the Waves shop and check it out for yourselves! Dial in and go BERSERK!

Oh, and did I mention this one they will also be releasing for FREE?!

So hurry over if you want to grab it from Waves Audio directly for Black Friday 2019!