If you have been listening to nu disco and indie dance over the past few years, there is a good chance you have heard of Televisor.  This duo has been pushing the limits of all things funk and nu disco and the world has taken notice.  Their tracks racked up millions upon millions of streams on Youtube & Spotify and has earned them releases on some of the worlds top labels such as Monstercat.  We at Black Octopus were extremely delighted to have a chance to release their debut sample pack Nu Disco Dynamite which fully taps into their instrumentalist talents and technical production wizardry.  The pack is a solid 1GB library of royalty free sounds which are sure to provide inspiration for music producers all over the world.  Not only is their sample pack a wicked tool kit for musicians to use, they have also decided to share some of their most valuable production tips listed below…

1) Less is more. When mixing your tracks, make sure everything you record as well as all your samples sound good at the source. This minimises the need for extensive processing and effects in your project further down the line to copensate for lack of quality. Having good quality samples and recordings will mean you spend less time worrying about your mix and more time focussing on the music.

2) Reference your music. Having a point of reference when writing, mixing and mastering music is very important. Usually we will reference tracks that we feel carry similar musical and production traits of that we are trying to create. Sometimes its our own music, other times its someone elses. For example, if youre writing a disco inspired dance track and youre trying to achieve a punchy and warm mix then referencing a track by Oliver could be a good choice.

3) Layer your drums. Dont be afraid to layer up your samples to create new and interesting sounds. Some of the best drums we have made have been through layering and playing around with multiple samples. To make your kicks and snares fuller, a general rule of thumb is to select samples that carry different characteristics of the over all sound you want. As an example lets say you like the top end of one kick sample, and the warmth and punch of another, why not layer them and eq to taste to create your own. Its a good idea to tune the drums to the same pitch and be sure to check for phase issues that can occur when layering!

4) Rest your ears. Take breaks every so often when mixing. Often our ears get tired and our creative judgements when mixing can have negative affects on the overall sound of our mix! We try to take 45 minute breaks every couple of hours to help our ears rest and recalibrate.

5) Set goals. Daily, weekly and monthly goals! Set them and try to stick to them, its helped us become much more productive. Make a chart and use it to keep track of your progress, if this is your hobby then treat it as a second job. Set targets and achieve them, your productivity will be much higher.

Favorite VST Instrument at the moment? Really enjoying Diva by U-He at the moment. Fantastic for creating some analogue inspired patches, although it can be a bit of a CPU hog at times.

Favorite VST effect at the moment?   Flangers and phasers are always fun, particulalry on guitar or bass parts. Bitwig’s flanger is great.

DAW of choice? Bitwig is great. We have been steady users since the Beta!

Do you use any hardware?  If so favorite gear? The Moog Little Phatty gets used most sessions! We used it quite a lot during the creation of our sample pack too. For a monophonic synth Its a work horse.

Producer you are digging at the moment?  Cant go wrong with a bit of Oliver

How long have you been producing for? Around 8 years or something like that! After a while you lose track.

Biggest mistake beginners make?   Assuming they can make professional level music in a matter of weeks, not years. Many beginners Focus too much on trying to ‘make it’ instead of simply enjoying the whole process of music making and learning about music production! If you truly enjoy something and keep at it then you will reap the rewards of your commitement and time.

Is there is anything else you want to share?   Thanks to all the people who continue to support us and our musical endeavours! We have a lot of new music coming out very soon, as well as various shows. Stay connected and follow us on social media: 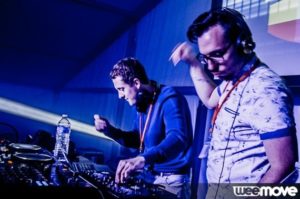